Argentina is the eighth-largest country in the world. While it’s well known for fine wines, soccer, the tango, and Eva Peron, over the last decade, the country has emerged as the premier reverse season fly-fishing destination—because winter in the U.S. means the kickoff to summer in the Southern Hemisphere. It’s easy to reach Buenos Aires via overnight flights, and visitors to this fascinating nation rave about the hospitality, warmth, and sense of cultural and family pride shared by the Argentine people.

More about Fly Fishing in Argentina

Tierra del Fuego is the ultimate Argentine destination for sea-run brown trout, period. Once you’ve experienced it, you know that traveling to the end of the Earth is the only way to access one of the greatest fisheries available. The Iberá Wetlands, in northern Argentina, boasts fly fishing for Golden Dorado in a region that dwarfs the Florida Everglades. Just to the East, the Paraná River is home to some of the largest Golden Dorado on the planet. We’ve developed three programs along the Paraná, strategically located in the upper, middle, and lower sections of the watershed to target the large, migratory Dorado who use the waterway as a superhighway to their spawning grounds upstream. As for the fighting ability of the dorado? They are hyper-aggressive, powerful, and acrobatic. Enough said.

Patagonia’s trout fishing rivals the best of the American West—but the time to fish here is January through April, when you’re snowed in at home. Visit us at Northern Patagonia Lodge, where you’ll have the opportunity to suit up, boot up, float and wade several of the most productive rivers in the region. 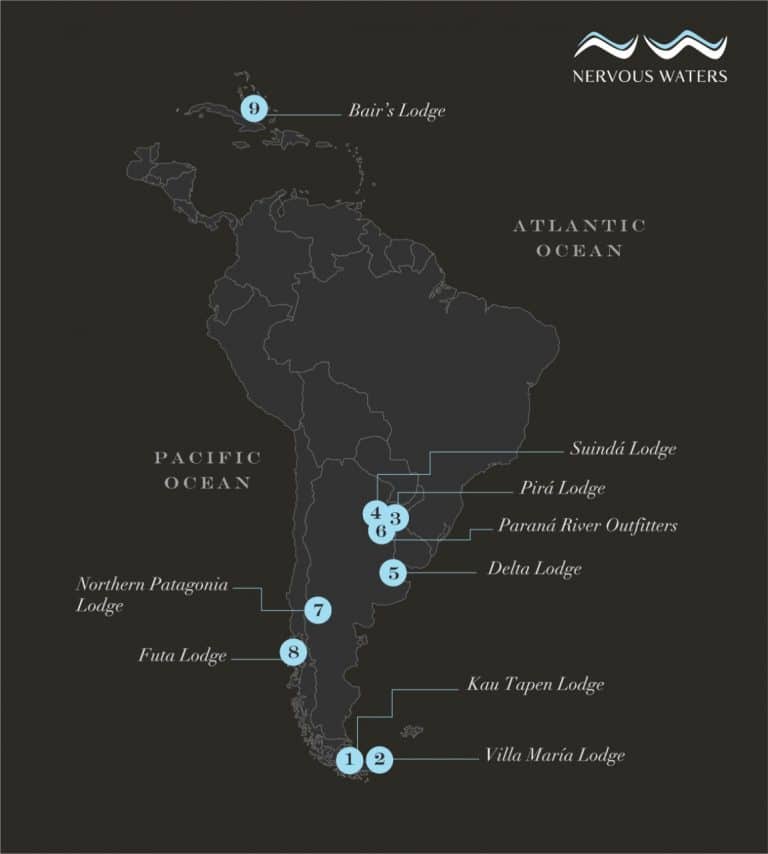 Kau Tapen and Villa María lodges are both nestled on the south bank of the Río Grande in Tierra del Fuego. Suindá and Pirá lodges, on the other hand, are located in Corrientes Province in northern Argentina. Pirá sits in the middle of the Iberá Wetlands, while Suindá rests in Itatí, near the Corrientes airport. Northern Patagonia Lodge is located in picturesque northern Patagonia, near countless miles of trout-rich water.

Last but not least, our new Delta Fishing Trips & Eco Lodge program is just minutes away from Buenos Aires—ideal for those seeking respite on the Paraná Delta while fishing for Golden Dorado and Tararira. All six lodges in Argentina are operated by Nervous Waters. Join us for world-class fly fishing with bilingual Argentine and international guides, as well as fine cuisine and the best in Argentine hospitality.

At each lodge, Our commitment is the same

We work tirelessly before, during, and after the season to offer our fishing guests an authentic and rewarding experience. We pay attention to the smallest details—from being on time every time, to the quality of our wines, to the type of vehicles & boats we choose. Our Argentine fly-fishing lodges host only a limited number of guests each week, again ensuring great service and plenty of “elbowroom” in the lodge and on the river.