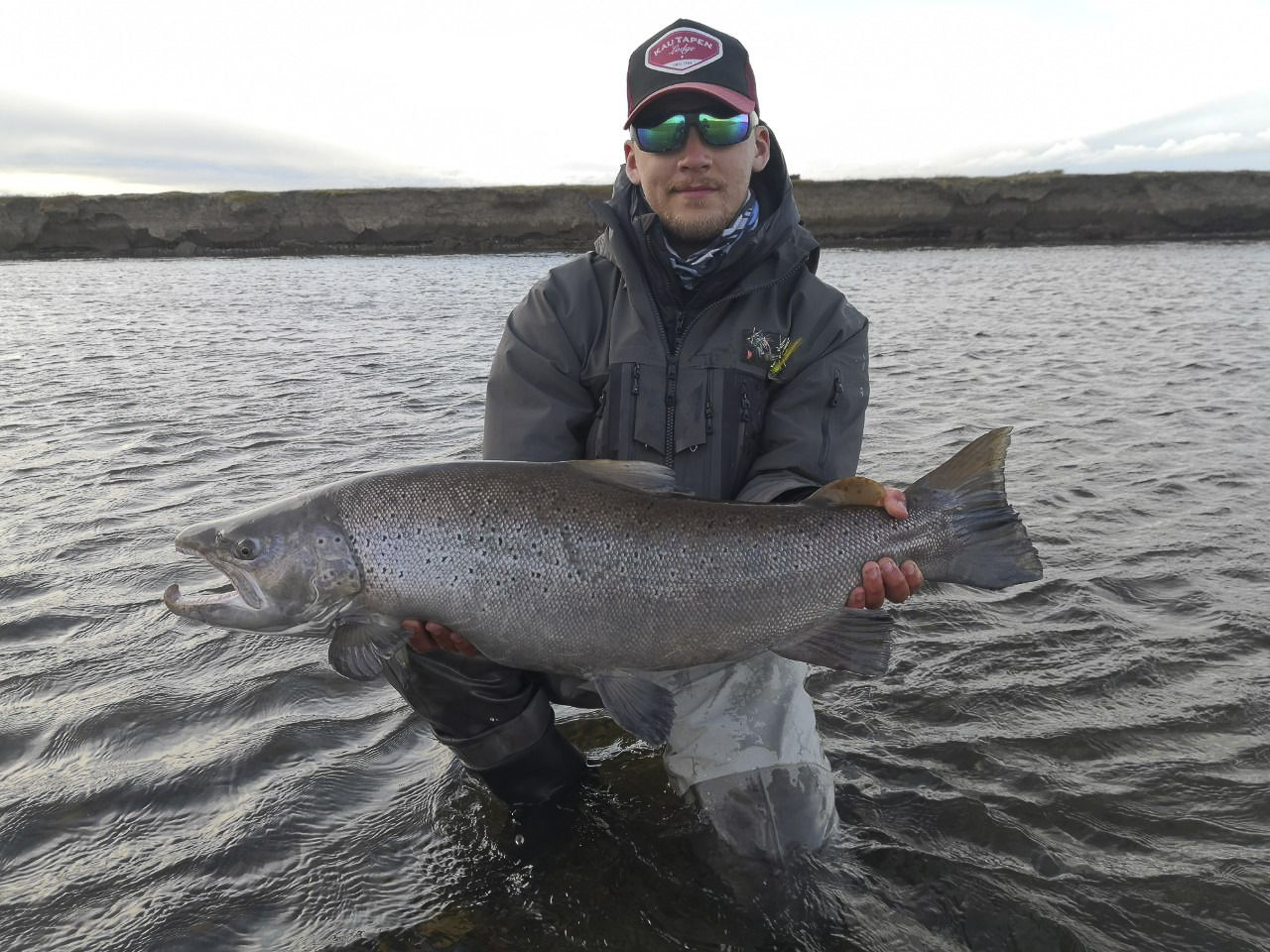 The strong Tierra del Fuego winds were on full display this week, as guests from the USA, the UK, and South Africa arrived at gusts upwards of 68kts or 130km/hr. This act of nature was particularly interesting because over half our arriving group was totally new to spey casting and fly fishing for anadromous fish. Some immediately opted to return to the lodge to enjoy the spa, jacuzzi, and amenities of the hotel, while others relished in the challenge of fishing in some of the most intense conditions imaginable. Luckily for all, the wind calmed down enough in the afternoon for all parties to head out and despite the dirty water, there were fish to be had.

Mark, Vaughn, and Frank all landed their first sea trout(s), including a few great fish of 12lbs. However, the fish of the day and the week would go to our friend Hubert, who converted his first bite of the week into a magnificent 22lb fresh hen fish. A great fish in its own right, it was only made more special by the conditions the first day dealt with us.

The following day the water cleared up considerably, as it does not take a long time for the river to return back to normal following a windy or dirty water event. Fish were landed in both the Grande and Menendez and Richard and Dave had a fantastic evening session bringing 5 sea trout to hand. It is a pleasure to catch every one of these fish and even better to watch them swim away!

There was an amazing fish to note for guest David from South Africa. Despite fly fishing “one or two times” prior and never holding a spey rod, the analogy of ancient Roman catapults gave him enough understanding of the physics of the line and rod to hone in his cast. He fought and landed an 18.5 buck with guide Valentine, which is quite a feat for any angler.

Throughout the week we saw the Menendez truly come into shape, as guests were consistently hooking, landing, and telling fish stories of big sea-trout in small water. Richard and Dave each had a heartbreaker, playing the fish for more than 10 minutes without ever seeing them. This small river often produces some of the largest fish of the season, although the close-quarters combat with a trophy fish is no easy task at times. It was great to see guides and guests alike taking advantage of all this special river has to offer, sometimes spending entire sessions with single-hand rods prospecting through the many pools. The upper Menendez was fished with guests for an evening as well, resulting in a 13lb fish landing for David among others hooked.

While the wind on day one was the most severe, conditions certainly did not let up all week apart from a few calmer evenings. That is until the last day, where clouds and calm had all excited to head out to try their luck. The morning and evening sessions were productive with fish hooked all around, notably a 17lb stunning hen for Richard on his single hander and a 15lb fish in Menendez for Dave. Richard’s fish gave a spectacular account of itself with a strong take as the fly had barely touched the water followed by a series of jumps that kept all watching on their toes.

This week had a bit more leisure for all, as stated before, as many guests made full use of all of the lodge’s amenities. There were late nights spent singing at the bar, breaks for meet-ups between groups on the river, and all-around good times had between everyone. Adding in the strong winds, unpredictable weather, and new anglers, it can be said that it was a resounding success. While we tend to focus on the fish, it’s hard to ignore the other great parts of Kau Tapen from the lodge to the food to the amazing landscape we all call home for almost half the year. Dave, an enthusiastic photographer, took time each day to shoot prints with his 1950’s era camera, and David, an avid and professional bird watcher added many new species to his life list. Add on some big sea-trout and you have the experience of a lifetime!

It is truly turning into a season to remember here at Kau Tapen, and we cannot wait to share it with all of you from around the world. For current updates from the river, be sure to follow our social media accounts (@kautapenlodge and @nervous_waters).