Currently as of Sunday 01/24/2016, the Futa River is running exceptionally high which has introduced some new challenges while fishing for aggressive browns and rainbow trout. With the higher water levels wading is limited and the majority of fishing is done by boat. Naturally water clarity is down, however, this is a plus considering the visibility usually ranges between 8 and 12 feet at lower levels. While targeting brown trout it is imperative to have a setup that includes sink tip or full sink line in order to present large streamers at an appropriate depth. A 6 weight rod with 200 gr. line is sufficient but a 7 weight with 250 gr. or even 300 gr. is preferred. Streamer color patterns vary however, dark olive, brown, and black are most effective especially during sunny days which are plentiful here. Fishing for browns is most productive during lower light conditions in the early morning or the evening but this past week several large fish have been caught during midday using sink tip line swinging large streamers in deep runs and under cut banks. Rainbow trout fishing has remained constant despite the high water. The locations have changed slightly however patterns and techniques remain the same. We regularly sight fish rainbows in eddies and slow moving water with small dry flies during the evening or late morning hours. Adams, Royal Wulff, Blue Wing Olive, and large Stimulators are the flies of choice during the hours of the hatch. Throughout the day as the temperature rises large terrestrials, such as Fat Alberts’ and Chernobyl Ants’, become effective for both rainbows and browns alike. We regularly use nymphs as droppers off of large terrestrials. Several favorites are the Prince nymph, Flashback Pheasant Tail, and the standard Copper John all between sizes 12 and 18. With dry flies and small nymph patterns 4x and 5x tippet is necessary, 2x and 1x are commonly used with streamer patterns. Productivity has been somewhat slower than usual however it will only improve as water levels begin to drop. Already the river has come down nearly a foot in the past two days and will continue to do so in the coming week. I look forward to guiding you here at Futa lodge and hope to see you soon! 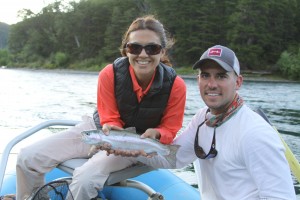 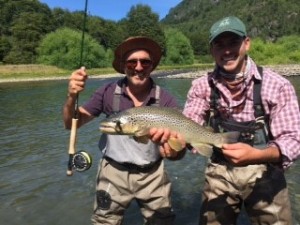 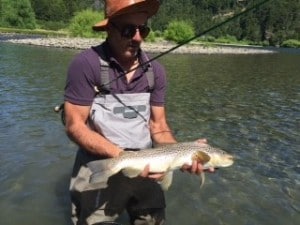 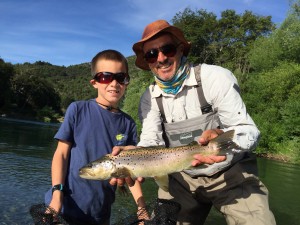