Ever since Max M. went south to the Rio Grande and Steve E. travelled North to the Ponoi there has been a huge connection between both places.

Both guides and guests have followed the same paths and made similar journeys.

Week number 4 at Kau Tapen saw quite a collection of these journey men all gathered in the one spot and although the current weeks fishing was top priority one could not help feel the sense of nostalgia in all those present.

Former Kau Tapen manager and current Ryabaga CEO Steve E. as well as former Ryabaga manager Roddy H. joined us for the week, having first crossed paths with guides Max and Andrei some 17 years ago in Russia they all had plenty of stories to catch up on.

Jon S. and some of his party of friends are also regulars in both locations and fishing tales from near and far abounded on our first tapas night.

Jon being no stranger to the Rio Grande has land more trout down here than he cares to remember, the story was no different this time around and from the very first session he was into fish. His best session of the week produced seven fish all on a single handed rod.

Father and son team of Hubert and Jean were more interested in quality than quantity and had an amazing streak of land fish on 6 consecutive session, none of which were less than 10 pounds, the largest tipped the scales at 16 pounds.

Jon’s party also consisted of two complete fly fishing virgin’s. Mike and Ralph having heard Jon speak about the Rio Grande for many years they decided to bite the bullet and see what all this talk was about. Taking a little time to find their feet by Thursday they were consistently landing fish. Mike’s jubilation at landing a 19 pound fish late on Thursday night was priceless, awed not by the power and beauty of the fish but the ammunition it provided to “Burst Jon’s Ball’s” having land a larger fish.

On the same evening Roddy’s fishing partner Rick landed a 22 pound fish from Henry’s Home, indeed many fish in the teens were landed that night and the final two in the Shakour party, Bob and Jeff also shared in the spoils.

Gaston’s Friday night announcement that we had land over 100 fish for the week came as quite a surprise as we had battled strong upstream winds on both Monday and Tuesday. This change in wind direction usually heralds rain and on Wednesday morning the heavens opened. To the relief of all our guests the expected washout did not occur, a sign that the majority of the rain fell on the lower river basin as opposed to high in the Andes.

Forecasts of rain for the coming week are welcome as the river can only be characterized as low, with most fish being encountered using light tackle, ie intermediate tips, long leaders and small flies. 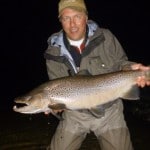 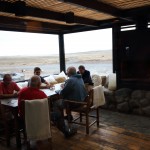 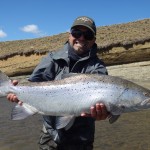 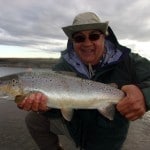 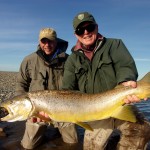 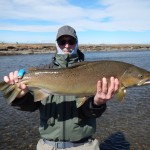 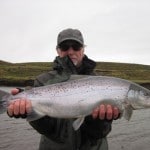 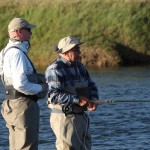 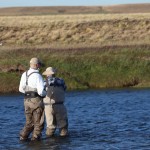 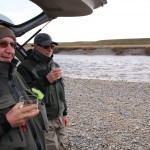 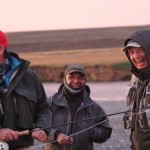 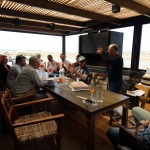