Week number 7 has seen us reach the half way point in our season, physcoligically for all staff this is a significant milestone, working in an isolated location, far from family and friends is not easy but knowing you are on the home stretch gives you a calm reassurance that you are almost there.

We had a predominantly Russian group of guests this week with the exception of Kau Tapen legend and all round gentleman Gianni who was also accompanied by his wife Lalla.

Thankfully the moody fish of last week have settled into the cold water regime and  were less affected by cold overnight  temperatures. Persistant upstream winds on Sunday, Thursday and Friday did hamper the anglers efforts at straight line presentation however cloudy conditions on the evening sessions made for very productive fishing and with the early on set of darkness some of the fishing at the so called magic hour was ridiculous.

Sergei with guide Gaston set an early benchmark on the warm up session landing a 13 pound fish which heightened expectations for all other guests immediately. His fishing partner Igor did not have to wait long and went one better the following morning landing an 18 pounder.

Fishing alone Gianni did what he does every year, taking his time he carefully picks out as many fish as he can from each pool, at the age of eighty  the mans ability to catch fish after fish is amazing and if the truth were told caught many more fish than men half his age. The phrase “the olde dog for the hard road and the puppy for the path” comes to mind.

There was a touch of Hollywood around the place as Vladimir, making a film about different fishing destination around the world had cameraman Jako in toe, indeed Jako was kept quite busy throughout the week and some of his final footage and still shots were simply amazing.

Vladimir’s son also Vladimir and Gregory took things at a much more leisurely pace bringing a selection of wines, cheese and dried meats to the river, for the amount of time they actually spent fishing they did remarkably well.

At the risk of sounding like a broken record, again our numbers remained amazingly consistent given the low water conditions, our average weight was an incredible 9 pounds. Unusually for the second week in a row we failed to land a fish over 20 pounds, with the accolade of biggest fish of the week being awarded to three different anglers all landing fish of 18 pounds.

As I write the river is rising and has increased in height by 4 to 5 centimeters with no change in its colour. Hopes are high that this coming week could be a belter. 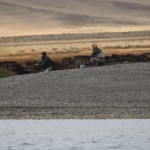 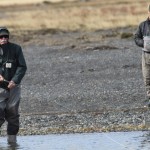 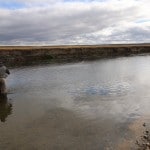 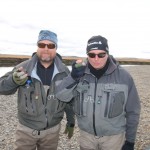 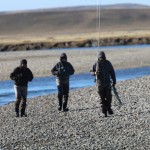 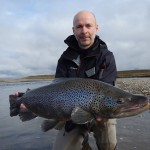 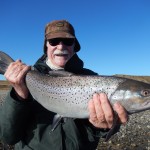 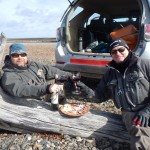 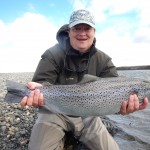 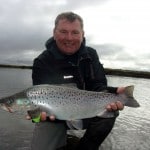 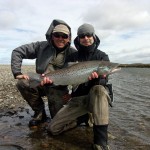 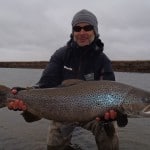 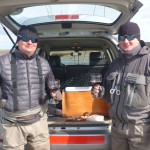