Its no secret that you enjoy guiding some guests more than others, nationality is irrelavant as difficult guests can come from any corner of the planet.

It is always astounding to get the distinct impression from your guests that you are actually trying to hinder their chances of catching a fish when in fact you are doing your upmost to do the opposite. Thankfully such guests are few and far between and the group we welcomed to Kau Tapen this week were all polar opposites to those just described, in fact for both guides and house staff these folks could only be described as dream guests. Both relaxing and pleasant to be around, our time on the river this week seemed to fly by and no sooner had we finished assembling rods than it felt like we were having our final tapas night of the week.

A slight rise in water levels ( 4 – 5cm) just as the guests arrived lifted not only the river but also the sea trouts spirits and quite alot of movement was observed during the low light conditions of early morning and dusk ( the sea trouts preferred time to travel upstream).

The family group of Janet and Bill accompanied by their sons Jake and Frost started their first week of two on the Rio Grande, here with us in Kau Tapen, they have travelled down river this week to see what the Villa Maria waters have to offer. For Frost and Jake it was their second season down here with the double handers and the improvement in their ability was tenfold, so much in fact that they almost got a compliment  from fly casting supremo Max Mameav “ Almost”.

Although it may kill their father Bill to admit it these two guys are close to surpassing their old mans ability to catch trout.

Their mother Janet, a lady as always was a pleasure for all the guides to guide and finished her week on a high landing three fish in her final session.

Our other group, also hailing from the U.S were a mixture of both guides and clients who all crossed paths at Rock Creek Anglers in Wyoming, over the years the group have built up super guide – client relationships and now embark on a fishing trip at least once a year as friends. All first timers to the Rio Grande they were completely astounded by what the river thrown up to them.

Gaston was the guide who first helped open their eyes to the rivers potential as Hank and Rick hooked six fish on Monday morning of which four were landed, the biggest being 22 pounds.

Clark and Cole both experienced “Pro guides” with the Wyoming outfitters were here to relax, enjoy the surroundinsg, fly a kite in the Tierra Del Fuego winds and probably last on their list of priorities was to land a few decent trout.

Clarks dead drift dry fly approach was a refreshing change from dredging leaded rabbit across the pools and by the weeks end the foam hopper had accounted for seven fish.

On Thursday evening in difficult upstream winds Cole’s double taper quad tip line was working with lethal success, his final fish of the session was a cracking 14 pounder.

Brothers David and Did had contrasting fortunes througtout the week and if one brother was have a purple patch the other was sure to skunk. Thankfully being the two super relaxed dudes that they are they took things in their stride and enjoyed both the ups and downs.

It would be wrong not to mention the standout session of the week when Hank, Cole and Clark teamed up to give Condor beat a real spanking, they landed a total of twelve fish in less than four hour, Clark’s 19 pounder was the fish of the session.

This small change in water height has helped us in several different ways obviously bringing fresh fish into our pools which in turn stir up the older fish which have been waiting patiently for their chance to spawn. Increased flow has also increased our fishable water and instead of casting a mile down stream and stripping like crazy a much more natural and effect drift is obtained by simply using the rivers flow. As we draw into the close of the season rainfall is becoming more regular and low water worries can be laid to rest for another season.

Prospects for a productive grande finale are high. 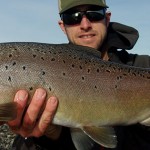 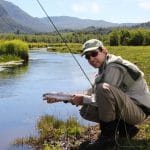 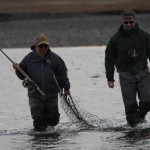 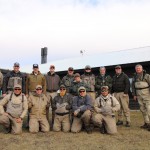 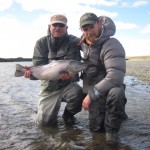 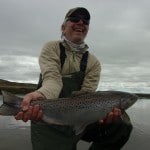 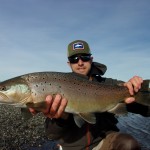 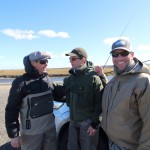 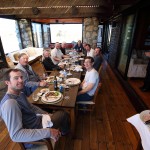