Free time last summer allowed me to spend sometime in the Southwest of Ireland fishing on what is considered the premier sea trout fishery on the island.

This was probably my 15th or 16th time visiting the fishery and in the past I had been pleased with my success ( I am talking Irish standards not Rio Grande standards ).

I decided to break with tradition this time around and instead of plodding my own course I hired a ghille, a gentleman who I had know for many years and who had been guiding on the fishery for many more.

Leaving any ego or self professed knowledge I thought I had on the bank I approached the day as a learning experience and hoped to gleam as much information from a man who had spent a lifetime on the water.

Without going into too much detail a most enjoyable two days was had on the water, landing sea trout on both days and picking up a few valuable tips along the way. One abiding phrases however will stick in my head for many years to come.

No less than two minutes into our first mornings fishing my ghillie turns to me in his unique southern draw “ lisen to me here now Matthew, fishing here is like playing soccer in the Premiership but not only that you are playing in the top three of the table”. In hindsight this was a form of physcological grooming, things needed to be done in a certain way in order to acquire the desired result and no matter how many other ways I had caught fish in the past “this was the way it was done in the deep south”.

Rio Grande’s sea trout while more plentiful and much bigger can be described the same way. Each pool requires a key set of ingredients, once your guests become familiar and follow these ingredients fish usually follow.

Repeating guests Nigel and Graeme joined us from the UK, this was certainly not their first “Rio Grande Rodeo” and they were ticking all the boxes right from the first session. Their anchors were solid, loops tight, angles persise, their nymphs were hit with short sharp strokes while their leeches were carressed in smoothly with long slow draws. The fish just kept coming and coming, for their standout session of the week they were accompanied by head guide Gaston who returned to the guide cabin like a child buzzed up on smarties and coka cola. Having just landed a 24 pound submarine the final fish of a nine fish session he had good reason to be ecstatic.

Max Mameav was as plain stated as ever when asked by father and son team of Steve and Charlie “could he guarantee some fish” – “ if you can guarantee 80% of your casts land straight”. In fairness to the pair they delivered the goods and got their just rewards.

Sebastian and Nick expressed their desire to fish the more intimate and technical Menendez river early in the week, to tip the odds in their favor a little their guide darted from pool to pool rising fish on a hookless Sunray while then marking the spot with a line on the beach and returning with guests fully armed a couple of minutes later. Three fish from two pools in little more than an hour was not a bad return for their efforts.

Argentine Juan, a regular visitor later in the season when large colourful leeches are the fly of choice due to cold water conditions, was amazed how freely the same fish would take a fly as small as a size 10 green machine in our current water conditions.

Hailing from Colorado, Brodie and Joe took a little time to find the right ingredients but by the weeks end they had begun to crack the code and land fish on a more consistent basis.

I am always reluctant to give numbers in terms of quantity of fish landed for the week as it has little or no correlation to ones individual outcome if  “you don’t got the ingredients” but suffice to say week number 5 was the best week of the season so far, not only in terms of quantity but also quality.

Best of luck to our future anglers in their attempts to surpass Graeme’s 24 pound tank. 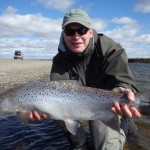 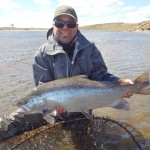 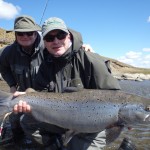 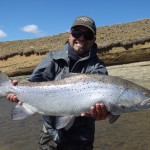 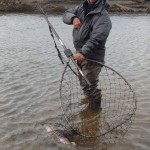 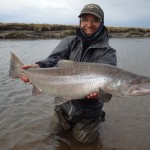 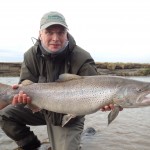 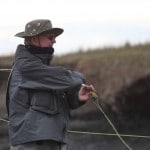 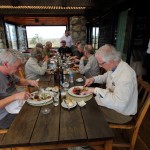 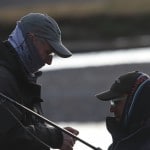 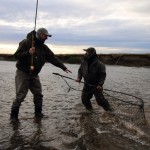 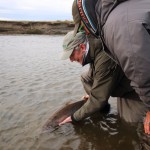 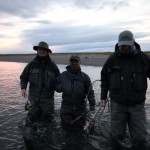