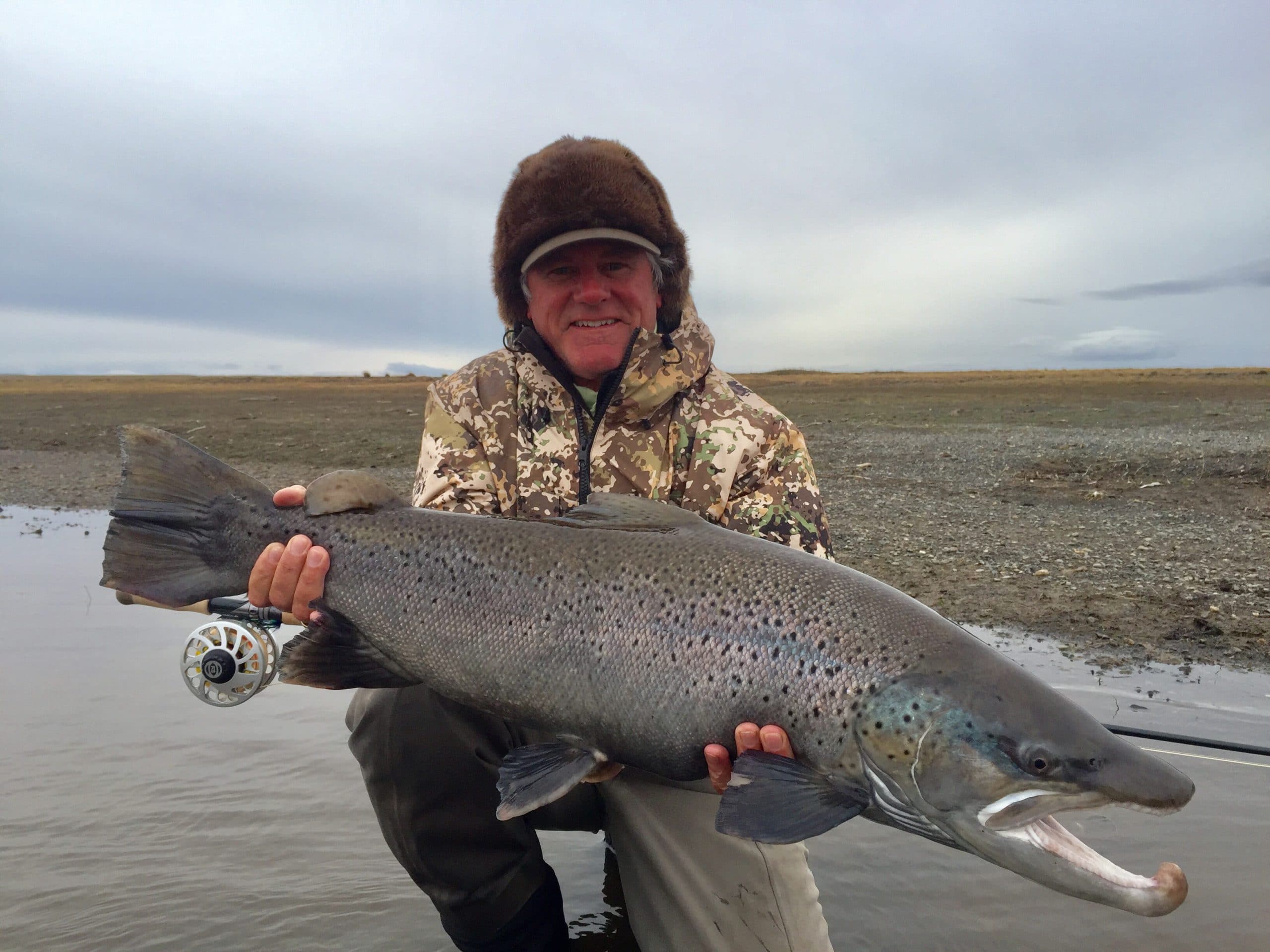 We began the week with tough conditions composed of heavy rain, high wind, and dirty water. Still, our group from the USA and Germany persevered and kept the spirit high. Our rise from the end of last week was substantial and the water was just beginning to drop on our first full day. Even through this, Tom came back successful, landing 2 fish for the morning, including a 15 pounder. This proved that with a bit of dedication, the fish could still find the fly.

The next day we awoke to a different river. While still high and dirty, clarity had improved enough to be fishable and the group wasted no time in getting some great catches on the board. Cliff and Joseph hooked 10 fish in the morning including a few great ones of 16 and 17lbs. Stephan landed his biggest sea trout ever of 12 lbs, quite the reason to celebrate! Tom put a 19 lbs fish in the net for the morning as well and it was smiles all around.

That evening some truly spectacular catches came to fruition. First Cliff landed a beast of 23lbs after a solid battle. On its first jump, Joe reeled up to watch and his remark of “that’s gotta be 20…” was spot on. Coleman landed 2 great fish of 13 and 18lbs, Paul had 2 of 13 and 14lbs and Charlie had a 14lbs fresh fish as well. The fish of the evening and the week, however, went to Tom with a magnificent 26lbs male of 95x 55cm. This one topped the 25lbs a few years ago that he landed with guide Gaston in Menendez. The two make quite the big fish duo!

The following day the river continued to drop and the action continued. Enrico hooked 8 fish in the morning up to 15lbs and it was his day, as he landed a 20lber in the evening session. This was his biggest Rio Grande fish ever and a true trophy. The size and quality of the fish we are seeing this year has been impeccable, as it seems that a couple of seasons of rest had done the river well. We are all excited to see what else it has in store for us this season and in the future!

Sadly, that evening we were met with heavy rain both here and in the mountains. That mixed with the previous day’s snowmelt caused the river to rise once again, this time to a season-high mark. The water became un-fishable both in the Grande and Menendez fairly quickly, although Edward and Tom each landed fish of 12lbs before it became too dirty. The final two days of the week were difficult, filled with casting lessons and enjoying the many amenities the lodge has to offer. Menendez did clear enough by the last afternoon to land a few fish, bringing an end to a challenging but rewarding week.

We did lose a few days to weather, but in the interim got to see the Rio Grande at its best. With three fish at or over the 20lbs mark and many other trophies, it’s safe to say all are wishing to return to the magic that Kau Tapen offers. Over the last day, the water has once again begun to drop and we are expecting the same excellent fishing following a big rise that was described before. The fish have had a rest and soon when they can find the fly, happy anglers and guides should have their hands full.