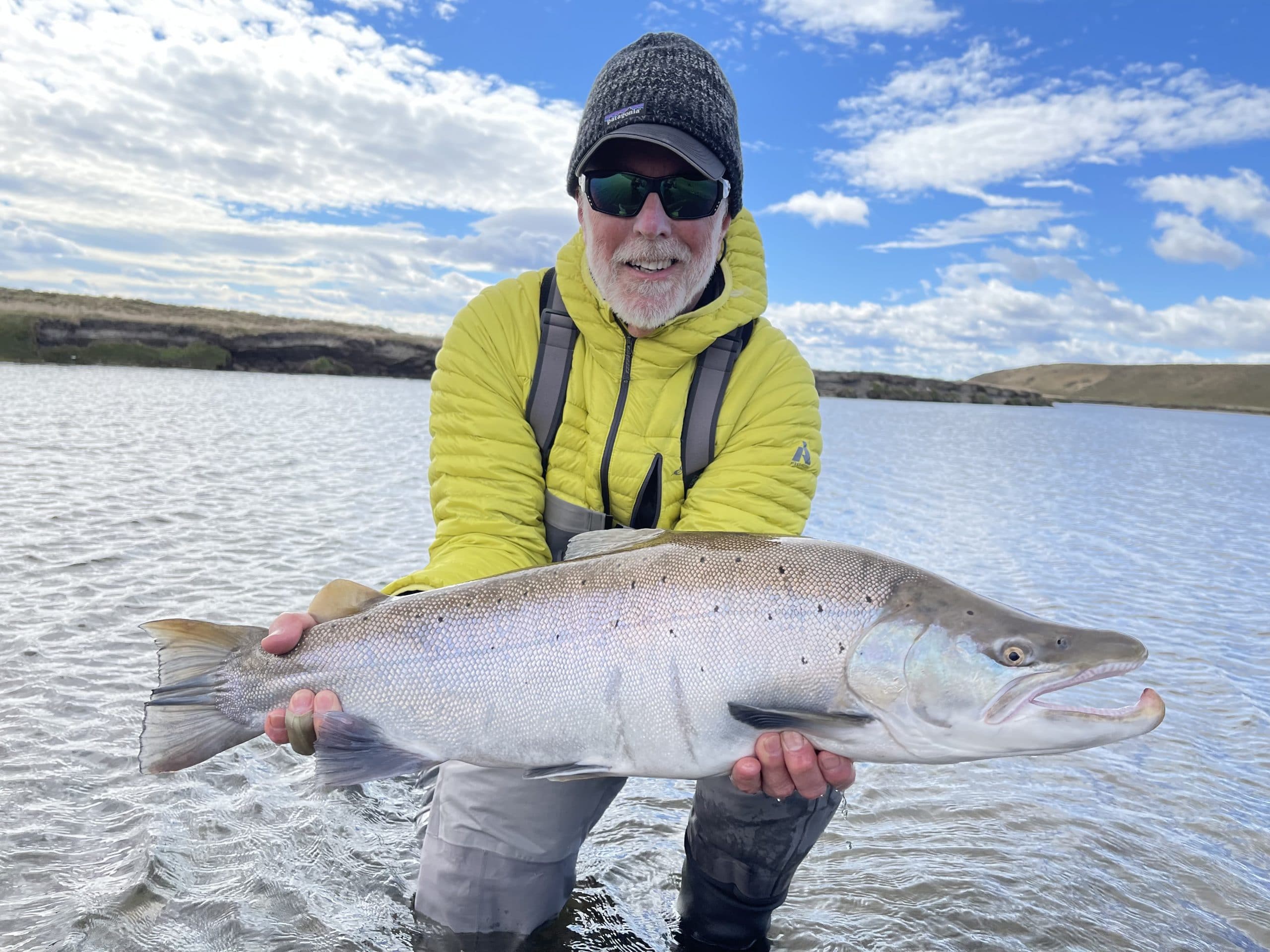 As more fish push into the river on a daily basis, we were excited to receive a group of guests from the USA consisting of some very accomplished world travelers and anglers. Though this week was an introduction to spey casting and sea trout fishing for some, a few great fish were landed during the warm-up session after practically no time at all. Notably, Anne put an 18lber in the net before the first full day of fishing. What a fantastic start to the week!

Although a little bit of rain was present at the very start of the week, it did little to change the low water level, which continued to drop on a daily basis. Still, the fish were there and a bit of persistence and help from the guides led to some fantastic results. On the first morning of fishing, Jeff and Margot had a spectacular session in the upper river where Margot hooked and landed 4 fish, including one of 16lbs. This is quite the feat on the Rio Grande, as to trick this many fish in a few hours is not always an easy task. Jim had a session of his own in the evening, with 4 fish up to 15lbs to his rod with a healthy average size. We saw this trend of good-sized fish continue through the week, with a memorable average weight of close to 11lbs per sea trout!

The next morning on the lower beats, Jim landed another great fish of 17lbs, however, in the evening the river seemed to come alive for all. Tom landed back to back 15 and 17lbers and Leland fought and landed a trophy of 19lbs. With fishing like this, it’s hard to argue that there is no better river for sea trout anywhere else on the planet!

On the morning of day 3, the wind rose to a level that all would consider difficult to fish through. Here in Tierra del Fuego, this is just one of the elements that is necessary to overcome in search of a trophy fish. Guides and guests were undaunted and all went out to the evening session with high hopes, and despite the wind, some fantastic catches came rolling in. Tom landed a pair of 16lbers and a fish of 14lbs, but in the final hours of the session, his partner Anne hooked and landed a fish of 18lbs. The fish of the evening and the week, however, went to Jeff, who found his fish of a lifetime in an amazing 93cm 22lbs fish in the upper river. We have been seeing these trophies with regularity this season and any cast can result in a true giant!

The next day, as water levels continued to drop in the Grande, was dubbed the “day of the Menendez.” Lee and Marles had 4 fish from the lower Menendez in the morning session- a fantastic feat on this smaller river! 3 other fish were landed throughout the Menedez for the other groups trying it as well. The same size fish that run into the Grande are found in Menendez, but it takes a bit of stealth and precision to be successful when targeting them here. The fight is spectacular as well, as there is only one place for the fish to go- up. Tom found a great 18lbs male in the main river to round out the morning session and this fresh, hooked jawed fish was certainly the sea trout of dreams. In the evening, Anne hooked 3 fish in Menendez and Jim notably landed a pair of 16lb fish from the lower Grande. The trophies certainly seemed to roll in this week.

Over the last two days, the water level continued to drop, making a few adjustments necessary for the guides and guests alike. Numerous fish around the 10lb mark were still brought to hand utilizing a variety of low water techniques and a few more 16lbers were landed for Jeff and Paul on the final evening. Paul’s 16.5lb sea trout was a fitting end to his week, as this was his first-time spey casting. It is always great to watch one’s improvement through the week, hopefully leading to a seasoned angler in the making.

Conditions this week were not easy given the wind and low water, but it was a super memorable and productive week for all. As stated above, the average fish landed was close to 11lbs. It’s hard to overlook statistics like this that show the amazing potential here at Kau Tapen. All guides worked hard to achieve this result and the smiling faces each night back in the lodge were indicative of a job well done! As of right now, a bit of rain is in the forecast for the beginning of next week, hopefully giving us a much-needed bump in the water levels.

For current updates from the river, be sure to follow our social media accounts (@kautapenlodge and @nervous_waters).

It is turning into a season to remember here at Kau Tapen, and we cannot wait to share it with all of you from around the world.. Thanks to all for joining us on this special fishery and keeping up with our reports from the river.