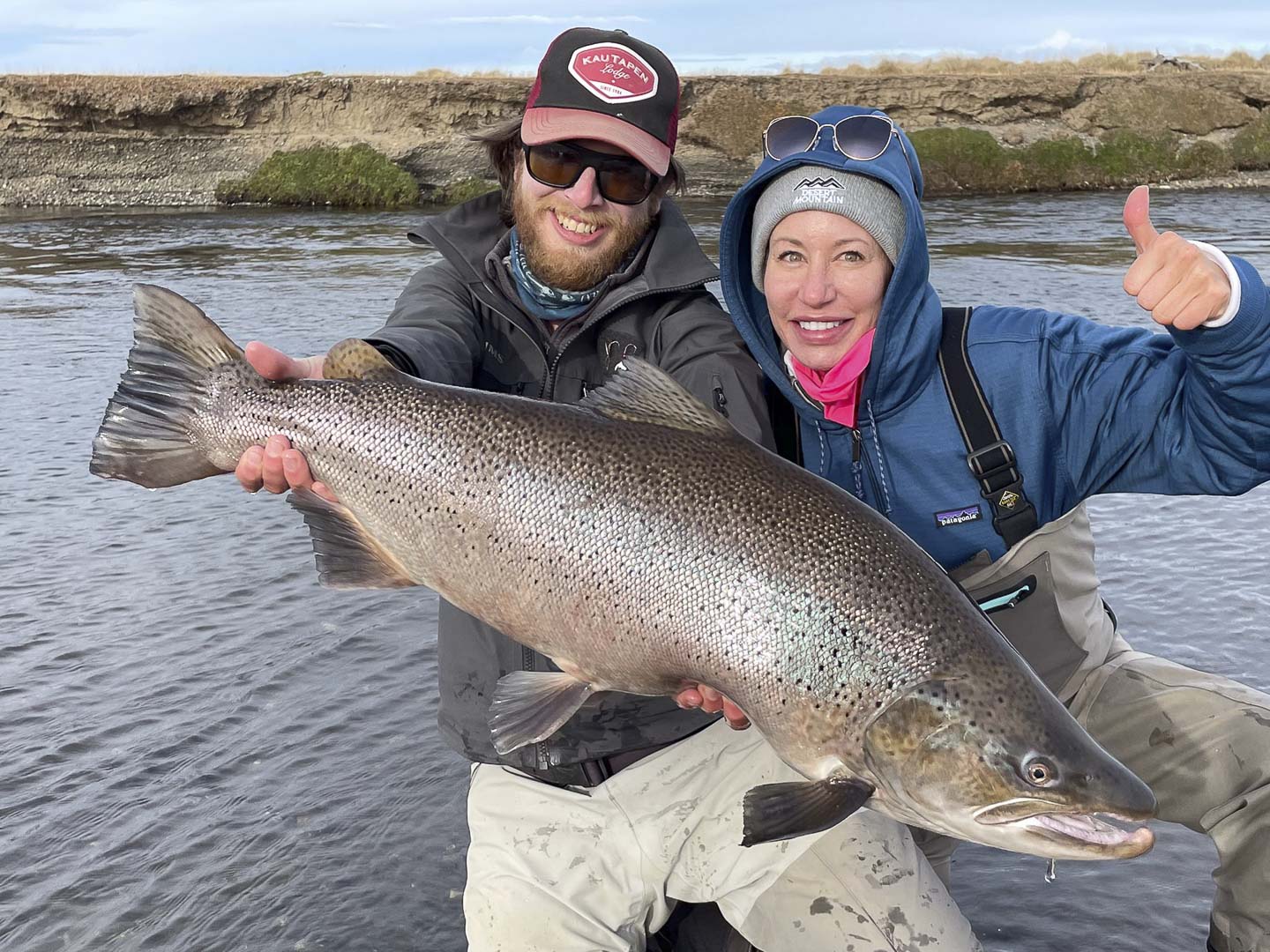 All of us here at Kau Tapen watched the weather with great anticipation this week, as rain was on the horizon. This coupled with the pushes of fresh fish we had been experiencing had us excited to receive a new group of guests from the USA, UK, France, Switzerland, and Germany. It was truly an international week with a great mix of personalities from all around the world!

The water was still very low to begin the week and tactics to match were necessary from the guides. Our e water in the upper river fished very well and Russel’s pool was filled from top to bottom with fish. Having the sole access to this water helps us immensely and produced quite a few fish including some true trophies. George and Willy landed 4 fish here the first morning, including 2 fish of 14 pounds. That evening, it was on fire once again, and Michelle and Jim had a session to remember for the rest of their lives. Jim landed 4 fish ranging from 10 to 17 pounds and Michelle found herself hooked to one of Rio Grande’s beasts. After a few jumps and a lengthy run, she kept her cool and a 28lb 93x 58cm male was landed! Many of the big fish wake up and become more active to the fly this time of year and this was a spectacular catch for all involved.

Not to be outdone, the very next day Jim found himself hooked into a monster of his own, weighing in at 23 pounds with measurements of 90 x 53cm. Fish continued to roll in and catch sheets filled up quickly recording the days fish hooked, landed, and lost. Many ones to two sea winter sea-trout also began to arrive and although they are not the biggest fish in the river, they bring a welcome tug as one works down the pools. That evening Marina landed a 15 pound fish of note among others described above.

Regarding the conditions, Monday and Tuesday were both rainy and the clouds could be seen on the horizon over the Andes as well. While the rain locally may raise the river slightly, snow up in the mountains means that water is coming, even if this is delayed for a few days. The fish seem to get more active as they anticipate this and some spectacular sessions were had mid-week. Phillipe and Phillipe returned Wednesday morning from both the Grande and Menendez with 10 fish landed between the pair and managed to net another 5 that evening. When the fishing becomes fast and furious it is best to take advantage of it and they certainly did, landing a week’s catch for one rod in just a day!

On the final day, news came from the upper river that the water had become murky and was rising rapidly. This had not yet caught up to the downstream beats in the morning, but that evening session the rise started to become evident everywhere on both the Grande and Menendez. For over two months now we have been waiting for this and although it briefly slows down the fishing, it could not be better for our fish for the rest of the season. Altogether, it was a great week with good numbers of fish hooked and some spectacular catches mixed in. A bit of rest during the pandemic seems to have done the river well and we could not be more excited to share this special place with all of you.