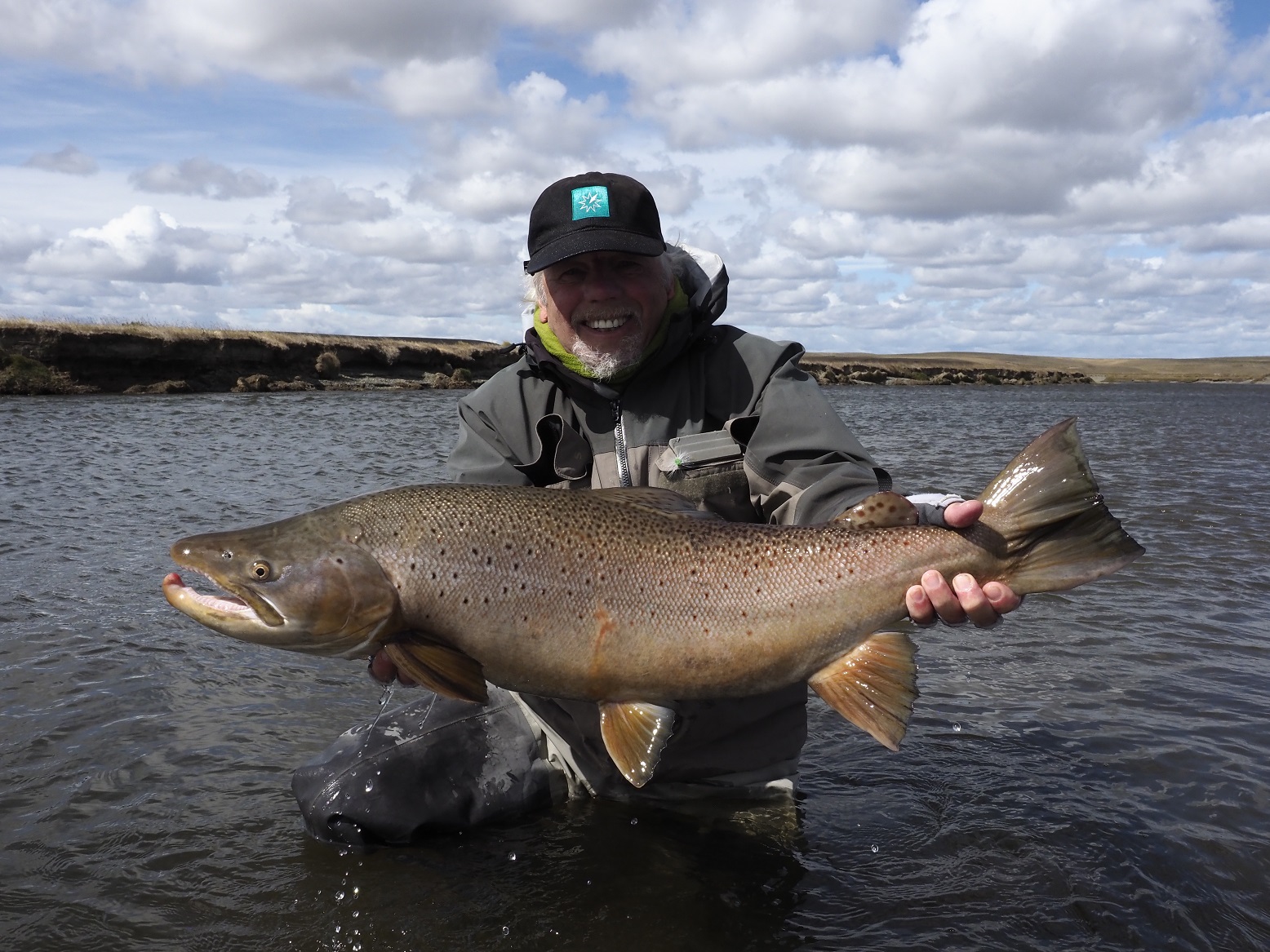 Going into the new week, the river was at the lowest many of us had ever seen it. But a lovely group was on its way here, eager to tackle whatever challenge this river may bring. Some familiar faces we all looked forward to see again, and new folk, who we were eager to get to know better on the water: Eliot (US), who would fish this river for his sixth time; Tom (UK), who had been here last week with us and brought his good friend Stephen (UK); Peter H. and his wife Sherley (US), who had fished this river many years ago, however never with us here at Kau Tapen; John and his son Peter B. (US), who appreciated every experience along the way and fishing seemed to be just the excuse for a great adventure; Mike and Peter F. (US), old friends from medschool, who have been fishing together the better part of their lives; and Daniel (France), who looked forward to a new challenge on this magnificent river. Such a nice group, that would grow together along the week, with such different backgrounds but the same objective in mind.

The first day started out to be by far the toughest of the entire season so far. Windy, sunny and very low water. The fish that were holding in the pools were completely shut down and for the whole group, only two fish were brought to the net, while losing a handful more. It could only get better after this, especially knowing that the forecast predicted some rain to come. Not much, but maybe enough to get the fish moving a bit and make more fish enter the system. Monday’s weather started off sunny, but as the day progressed, more and more clouds started to darken the sky. And while the morning was quite tough for all, the evening’s fishing picked up significantly, producing the first double figure fish – a proper 12 lbs fish for John on a Sunray and and two spanking fresh 13 pounders for Eliot and Peter H. Monday night brought rain – rain that all of us had desperately prayed for. Combined with the snowmelt in the mountains, this would hopefully bring some change in the water. But not only did the rain change the water, it most importantly changed the enthusiasm of the entire group. And while the river would not rise until the late evening, Tuesday already produced more numbers of bigger fish than the first two days combined. Daniel had his shot at a beautiful 11 lbs fish and Sherley managed four fish in her evening session alone, amongst them an amazing 16 lbs and another 14 lbs cracker – both super fresh.

After checking our watermark early on Wednesday, all of us got very excited about the 2-3 inches in rise thanks to the combination of snowmelt and rain. And our excitement was justified. Not only did we see a lot more action in the pools (jumping and rolling fish), the movement of the fish had shuffled the deck and a lot of these bigger fish got activated again. Tom started his day on a 19 pounder within his first 3 cast of his day. Stephen would later hook into a fresh 16 lbs in that same pool. Daniel managed a solid 15 lbs and Peter F. – having in mind that he had to leave early on the next day – landed another super fresh 15 pounder as a strong early finish to his trip!

Peter H. kept grinding and landed two double digit fish, a 12 lbs and an incredible 22 lbs cockfish, which would remain the biggest of the week.

However, this week did not only tell the story of hard-working anglers, but also of unfortunate ones. The lack of commitment in the bites made for many barely hooked fish that were never brought to net. The bitter taste of Eliot’s huge fish in the mid-to-high twenties, that spit the fly after an unbelievable 7 min. fight up and down the pool, remained for a long time. But that was just the morning session. And more big fish were landed during the evening, amongst them a nice 14 lbs for Stephen and a cracking fresh 17 pounder on the single hander for Mike.

While the water had already begun to drop again, the weather stayed fishy (slightly windy with overcast) and the fish remained quite active. Peter H. and Sherley had a magical morning session with three double figure fish and Tom landed another nice 15 lbs fish at almost dark. Eliot’s misfortunate continued and sadly he lost another huge fish in the evening. It was great to see that the small rise in water did bring a lot more of these super fresh 6-15 lbs fish into our waters.

Last day, last luck! However, the morning started off sunny and calm. A quite tough morning session once again, where only few fish were hooked. However, the pressure was off for all of the anglers already after a few very good days, were everyone was able to land some very proper fish. During lunch, the wind started to pick up, however, and dense cloud cover started to build up. The last evening started to look very promising. And so it came: Peter H. hooked into 7 fish alone, of which he was able to land four over 10 lbs. Daniel would land three good fish, amongst them a 14 and a 15 pounder. And Tom and Stephen had a magical 5-fish-session, where Stephen ended his trip on a 19,5 lbs personal best. A strong finish to a very, very tough week.

The combination of very tough fishing and great group dynamics in the lodge around the fireplace made this mix of anglers grow together into one very homogenous group. Shared success or misfortune, rather than competition in the river – that was awesome to see! And while we (the guides and staff) found a whole bunch of new friends in these amazing characters, I am certain our anglers have formed new friendships amongst them along the week as well. We dearly hope to welcome this great constellation of anglers and adventurers again for seasons to come!

Thanks for an awesome week, tough conditions aside!