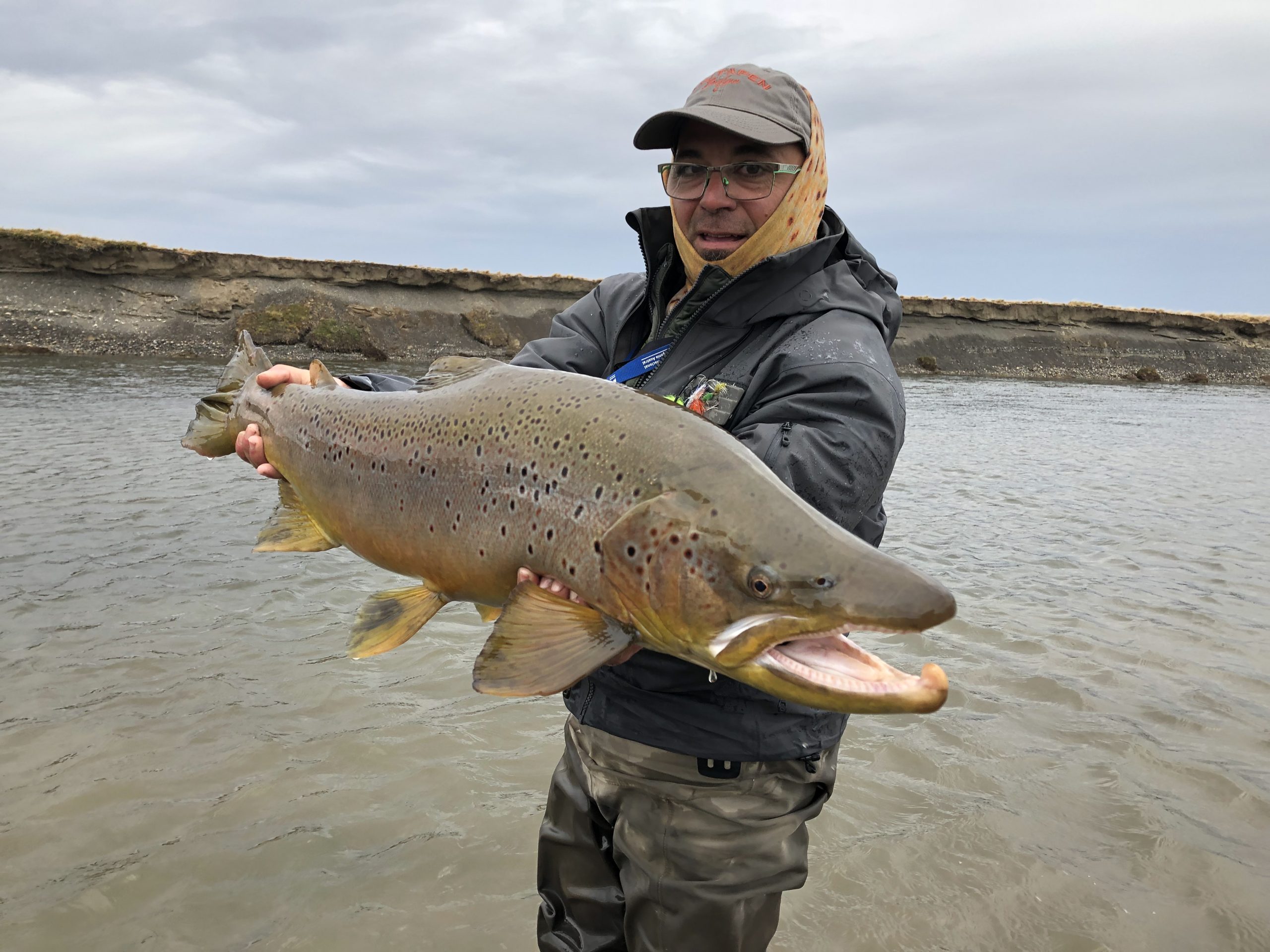 Here we go again, another week had gone by and we’ve almost reached halftime for this season. And – you might have guessed it already – we were still struggling with incredibly low water. But both – guides and our new guests alike – were eager to put in the work to make this week a success, no matter the conditions. Richard and Rupert (UK), John and Terry (UK), Andy and Sandy (Alexander, who had been with us here the previous week already), Chris R. and Chris M. (UK), David (UK) and Evan (US). A mixed group of great characters, some who had been here many times, some others, for whom this week would be their first Rio Grande experience. But all of them good fishermen with a great attitude, which was highly needed to tackle these tricky conditions. Despite of what good or bad surprises the river may bring, we were all looking forward to a fun week and making new friends!

The first fishing day started off with cold wind from the south. Although quite slow for most anglers, the first session already showed the group what can be possible on the Rio Grande, when John came back with a 19,5 lbs and Terry with a cracking 21,5 lbs fish from the same pool. Sandy, after already landing a 21 lbs the previous week already, topped his PB fish during the first evening by landing another amazing 22 lbs fish. Also John got lucky again with a 17 lbs and Richard started his week with a proper 15 lbs fish.

Monday was overcast and during the first hours, the wind was quite moderate. These good conditions made for pretty good numbers during the morning session. All anglers were able to land fish, many of them in the 8-12 lbs range, amongst them, however, a nice 16 lbs for David and a beautiful 15 lbs for Evan. The wind picked up and became very gusty towards the evening and the second half of that day started a bit slowly. But as the light started to vanish, the fish became more active. David managed another 16 lbs on a leech at almost dark and Chris M. finished his second day on a bang, landing an 18 lbs and an amazing 20 lbs fish back to back.

Although the numbers of the 7-12 lbs fish were quite impressive, there were also quite a lot of very big fish around, and Tuesday proved that again. Although the morning session was quite tough with strong winds of ~ 80 km/h, Richard came back with the fish of his lifetime, a 94 cm long cockfish weighting in at 23 lbs, which was properly celebrated by the whole group at lunch. Only late during the evening, the wind began to drop and the fish seemed to get more active rather late, just minutes before the session was over. But Evan and David had saved up some energy for these last minutes and it was well worth it. Just before it was time to call it, David hooked into a big fish. Before it was landed, Evan was in too: 21,5 lbs for David and 18 lbs for Evan, landing the fish only 10 meters apart from each other. What a double! Also Terry had a great last minute 15 pounder to finish his session on a successful note.

While the water was still dropping, our leaders were getting longer and longer during daytime with very small flies at the end of it. Most of our fishing was with floating or very light sink tips (1-3 inch/s). The river, being lower than any of us had ever seen it, had become quite narrow. Wading was not needed in most pools and we only entered the water where necessary. But despite those very tough conditions, everyone had already landed multiple double digit fish, amongst them some very big ones. And although the water remained low for the rest of the week and the only light drizzle that passed us would not at all affect the water level, we were catching good fish on a pretty consistent basis.

Every fish, however, was the result of hard work and many casts that every member of the group had to put in individually. John showed once again on Wednesday that consistency will pay off eventually and came back with another amazing 20 lbs hen fish. Also Chris R. showed how it can be done with a spanking fresh 16 lbs fish from our upper waters. Richard started his morning with a couple of very good fish, 13 and 15 lbs. The evening session, on the other hand, was quite tough, as the wind kept howling way into the night. That did not stop Terry from getting another perfect 18,5 pounder, though. Also David put in his effort once again and was rewarded with a proper 16,5 lbs specimen. The wind never stopped during the night and the second last day was one of the windiest of the season with gusts up to over 100 km/h. Fishing on the main river was quite tough during that morning – quite frankly, even standing up straight was tough enough. The combination of low water that was muddied up by the strong winds did not do the fishing any good. The Rio Menendez, however, was once again a saving grace, producing a few good fish for the team who was fishing it, amongst them a great 16,5 pounder for Andy and a chunky 13 lbs for Sandy – both caught on single handed rods. Luckily, the wind slowed down later during the evening and more good fish were brought to net once the wind let up and the light had gone down. Chris R. ended his day with a splendid 17 pounder and so did David. Rupert could be quite excited about a last minute 14 pounder that put on a great fight at almost dark. Most of the fish for the session were caught during the last hour of fishing. Everyone seemed quite relaxed, going into the last day of fishing. Despite the very low water and tricky conditions, the week had produced good numbers of fish and very good numbers of big fish! No one had the pressure of catching or proving himself anymore. But even the last day brought fish for everyone with a very strong finish by Richard, who ended his week on two outstanding 17 pounders!

The fishing this week was everything but easy and I think I can speak on the behalf of everyone here, that the good numbers of fish that we eventually hooked and landed were the mere result of very hard work on all sides. Our delicate approach (light tips, long leaders, small flies, and little wading) payed off and that was partly because our anglers were paying great attention to our guide’s advises.

But fishing aside – a week at Kau Tapen is not only about catching big trout, but more importantly about spending quality time with likeminded people, good food, new friendships and new experiences – fishing might just be a great excuse for all that. And in my eyes, this week has had all that and more. I am certain we will see many of these faces again, hopefully in similar constellation! Thanks for a great week!