Anglers the world over have heard again and again the conundrum as to why female anglers catch bigger fish, many hypothesis have been developed ( mainly by the dominant practitioners of the sport – Men), pheromones, shorter casts, delicate presentation, luck etc etc. Having witnessed this weeks fishing I would propose a much simpler answer “Chicas are just better to fish”!!!!

Week number two at Kau Tapen saw the arrival of twelve guests, nothing unusual there, of the twelve however four were female anglers and when I say anglers I mean anglers, not some poor olde doll dragged here with tall tales of glorious weather and light winds, and an Antarctic cruise thrown in as a sweetner.

These girls were the real deal, avid anglers, here by choice, ready to take on what ever the Rio Grande had to offer.

Female anglers are common the world over and we regularly have mixed couples fishing together, be it husband and wife, father and daughter etc etc. Quite often it is the female of the couple who ends the week with more fish, in the past I would have given this very little taught and put it down to the luck of the draw. However, as the statisticians would say, having a greater sample population of four female anglers the results are closer to the mean. By the weeks end on Friday it was blatantly obvious which of the sexes are better to fish. Not only had the chicas out fished their male fishing partners they had out fished the entire male contingent of eight anglers. This had my luck of the draw theory in shreds and I began to analyze the scenario deeper.

Guiding as opposed to fishing gives you a unique opportunity to “fish through someone else’s hands”, the catch 22 to this scenario is that some guests hands are more willing to cooperate than others, not in terms of talent but in more of a willingness to feed off the information you as a guide try to provide. Women in this situation are more of a blank canvas not in terms of knowledge but because they tend to hold less preconceived ideas as to how things should be done. On the river they are eager to try anything, regardless of how unusual it may sound and are far more rigid in sticking to instructions such as the angle of cast, speed of the fly retrieve etc etc.

I have spoke before about the importance of fishing with confidence and here again women excel.

“ Fish this line, with this fly, in that spot, using this retrieve “ and the instructions are followed as if they were one of the ten commandments.

Males on the other hand often tend to lose confidence in some part of the set up far too quickly,

“do you think we should try it this way”

By the time a guest has asked you this question they have spent the last five to ten minutes contemplating the situation rather than concentrating on fishing the set up currently in use.

Without turning this into a complete man bashing report our male guests did land plenty of fish this week and Steve M. kept some respectability on the figures by landing the biggest fish of the week, a cracking 20 pound cock fish, just in off the tide, I would go so far as to say it is one of the most impressive fish I have ever landed for a guest.

Bill Y. was up to his usual tricks at the bar and kept his fellow guests well entertained, he also managed to trick his fair share of trout on the river. Bill was joined by his wife Wendy, who instead of fishing used the week to relax in the Kau Tapen surroundings and wander along the many tracks and trails of the estancia.

Kau Tapen character and old favourite Bobby S. and his daughter Nini were also here. Nini impressed with the speed she took to the double hander, landing her first fish in complete darkness on Sunday, she excelled as the week went on. Bobby’s usual consistency did not let him down and he too accounted for his fair share.

As she does every year Nicole S. dominated with the floating line tactics and light flies, finishing the week on a high, in glassy conditions she rose a trout five times before finally connecting with it on the 6th cast, it would tip the scales at 10 pounds.

Austrian pair of Gerard and Peter returned for their second consecutive season, more determined than ever to land the elusive 20 pounder. Unfortunately he remained elusive but both were pleased, landing fish in the teens.

More accustomed to fishing on the Restigouche river in Eastern Canada, where a dead drift green machine works well, Ginny and David were amazed at its effectiveness when fished down and across, indeed the green machine regained its position as top fly for the week. Our water has dropped since the first week and the movement and buoyancy the green machine provides in such conditions is deadly.

The remaining two rods were filled by long term repeating guests Peter and Cheryl who had spent the previous week fishing at Pira and Alto Parana. Having got over the severe contrast in climate between Northern and Southern Argentina they fished well throughout the week and were pleased with their final results.

As I have mentioned already our water has dropped since the first week but heavy rain on the 23rd has stabilized the level. Judging by the size of Steve’s fresh 20 pounder the fish are not in the least bit inhibited travelling to our water. A forecast of stable weather conditions for the coming week bode well for this weeks guests and as I write our new group are gearing up for the warm up session, eager to find out what the Rio Grande has to offer 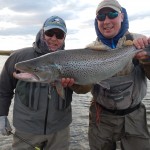 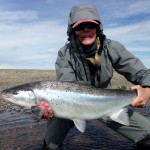 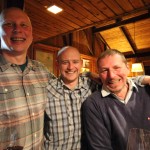 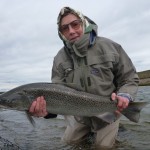 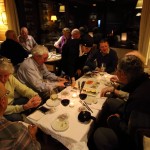 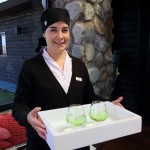 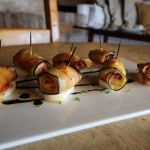 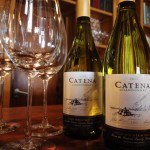 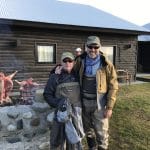 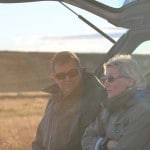 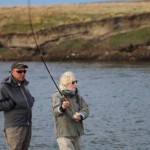 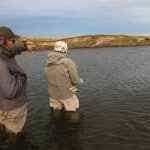 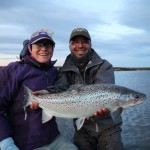 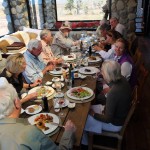