The rainy season is almost over, water in the marsh is dropping, and fishing conditions are as good as they get. Over the past week, we’ve had success on the Corriente River swinging large streamers on a deep (300-grain) line. Floating lines have also done well, blind-casting to the banks with 2/0 streamers in black/purple, black/red, and straight black with a little flash and a muddler-style head.

Mouse patterns have also been moving fish off the banks.

Fishing in the marsh, on the other hand, has also given us some nice surprises. One of them was Michael’s 13-pounder that measured 89 centimeters and put up a great fight. Rick’s 9-pounder was also memorable. It appeared alongside a school of dorado close to the boat. With some fast thinking he dropped his streamer in front of the pack, stripped fast and hard, and watched as it was instantly annihilated. That kind of visual is hard to beat.

The fish of the week, however, went to Cole who connected with his 19.5 pounder in a sidechannel trickle. The dorado jumped the fly in about 5 feet of water, and after an incredible battle Cole and his guide, Fergus, were able to tail it for the camera. Congrats, guys!

Looking ahead, the forecast remains promising with coolish mornings and evenings and ideal river temps for tempting more big dorado. 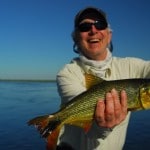 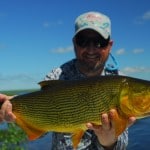 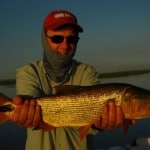 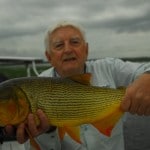 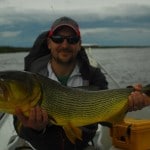 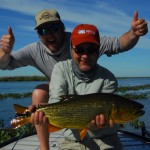