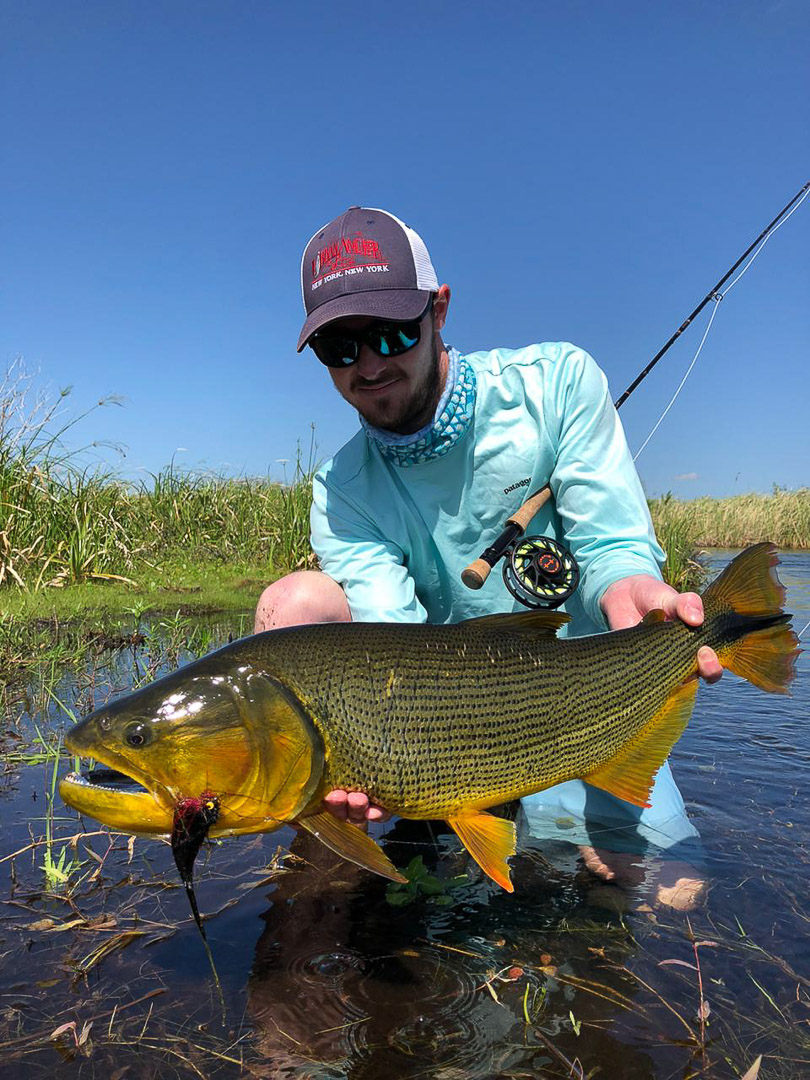 As we wrap up the second week of January, our fishing has been phenomenal! These last two weeks have been filled with Dorado action, new faces and plenty of familiar returning clients.

Our weather has been stellar with blue skies nearly every day and some of the most spectacular sunsets we have ever seen.

The Corriente River has been one of the most productive and active fishing zones for us lately. Especially in the headwaters of the river, which gave us a huge surprise, producing a massive Dorado, the size of which we hadn’t seen before. The lucky angler was Jim from the USA, guided by Jose Insa. Jim was using a 300 gr line, casting across the river with a dark-colored streamer pattern, when suddenly the line went tight. After a legendary acrobatic, head-shaking battle, the fish was in the net and weighed in on the scale at a whopping 33 lbs, setting a new record for our Lodge! That same week, another lucky angler Lech O., landed a 15 pounder during his morning session and capped off his afternoon session with a beastly 20 lb dorado, in one of our newly explored fishing sectors.

In the upstream reaches of the marsh, 5-9 lb dorado have been on the feed, and the section has produced a few unexpected larger dorado. In the mornings and evenings, mousing has been highly productive. Watching dorado crush Morrish Mice and other articulated mice patterns on the surface is always well worth the effort. Streamers are working very well too, especially Andino Deceivers and EP flies tied on 2/0 and 3/0 hooks. In many areas of the Ibera Marsh, visual takes are almost guaranteed. Watching an apex predator head wake off the bank in gin clear water to brutally inhale your fly is enough to get anyone excited. But once the fight begins, there is nothing like watching that beautiful golden fish leap out of the pristine water of the Marsh.

Our fishery is one of the most unspoiled natural regions I have ever seen, without a doubt. Our days are filled with flocks of birds and animals filling the marsh with sound, as they fly and swim close to the boat with little to no fear. Hundreds of fish species dance above the verdant green underwater gardens lining the channel bottom. All the while, the legendary Golden Dorado hunts below the water’s surface. Combined, this creates one the most unique angling experiences in a truly pristine and wild natural wonder, the Ibera Marshland.